Once upon a time there was a world without social media .

The negative impact on tourist arrivals in China is indisputable, however not all markets show the same level of sensitivity in the face of the current crisis. The US and Canadian markets show a higher drop in demand than European issuing markets.

The global impact of the Coronavirus outbreak in Wuhan (China) is directly affecting both inbound and outbound tourist flows to/from the Asian country. The overlap between the sanitary crisis, its subsequent air connectivity deadlock (65% drop in international air connections) and the Chinese New Year (25th January) and ensuing Golden Week has caused a global collapse of Chinese outbound tourism.

The impact is even greater for inbound international tourists to China, with a surge in cancellations and a drastic downward trend with regards to the demand to visit the country. The Travel Intelligence consulting firm Mabrian Technologies decided to analyse the impact of this loss of confidence from the main Western issuing markets to the Asian country. To do so, an analysis was carried out on the evolution of the Perceived Security IndexÒ towards the destination as well as the evolution of spontaneous demand (in terms of flight searches) from these markets to the destination.

The Perceived Security IndexÒ (PSI), is an indicator measured by Mabrian Technologies based on tourist interactions on Social Media (Big Data) in relation to a particular destination, with the help of Natural Language Processing and Artificial Intelligence techniques. This index allows them to capture the sentiment towards particular security aspects, such as for example a sanitary crisis.

The analysis focused on the US, Canadian, German, British and French markets as these are the five main Western markets in terms of air connectivity with China for the next few months (February to December 2020).

By analysing the spontaneous behaviour of these markets both on Social Media as well as in terms of demand for flight searches throughout January, what emanates is that the North American markets show a higher level of sensitivity towards the crisis than the European markets analysed. 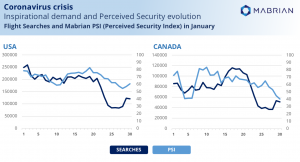 *Source: Mabrian Technologies. Flight searches to travel to China between February and December 2020 carried out throughout the month of January and channelled via GDS systems. PSI measured on the basis of interactions on Instagram and Twitter.

Both the US and Canadian markets show an acute drop in the demand for flight searches to China, which, in terms of intensity, clearly exceeds the drop in the Perceived Security Index (PSI) towards the destination. The decline in confidence of these markets towards the destination translates into a much faster and more direct drop in demand than other markets and demonstrates that this market is more sensitive than others. 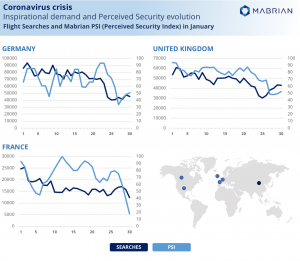 *Source: Mabrian Technologies. Flight searches to travel to China between February and December 2020 carried out throughout the month of January and channelled via GDS systems. PSI measured on the basis of interactions on Instagram and Twitter.

On a closer look at the reaction from the European issuing markets, the fall in demand shows a lower level of sensitivity. Indeed, despite the strong trend showing a loss of confidence towards the destination, in terms of the PSI index, and in fact a higher drop than the North American markets, this does not translate in such a direct drop in Flight Searches to China for the European markets. This shows that the impact the crisis is having for the destination is more intense for the North American countries implying a slower recovery of confidence and demand.

This type of analysis underlines the importance of monitoring tourism dynamics and perceptions in real-time for destinations and tourism companies with Tourism Intelligence specific tools. There is no doubt that tourism authorities in China as well as airlines and tourism agencies are now facing a profound crisis in the country and that having access to knowledge regarding the sensitivity of the main markets for the destination will allow them to act more efficiently. Mabrian maintains that the intuition era is over, and that current availability of data and accessibility in terms of costs make it imperative to rely on these new source of tourism knowledge.

Top 10 tourism initiatives of the week.