Curro’s Journey, a trip around the world in times of confinemen. 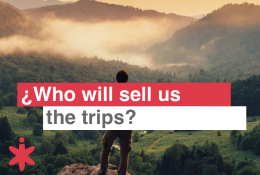 There is a lot of talk about the “new normal” and the new way of traveling post-COVID-19 but little about the new way of buying a trip. In this article we begin to analyse the effect of the pandemic on the travel agency sector in Spain.

If you are responsible for the promotion of a tourist destination or the marketing of any tourist product in the until now growing Spanish market, your most valuable treasure will be your agenda of key contacts in travel agencies wholesale, retail, MICE, etc. Previously, it was clear to us that with these contacts and a more or less linear process we could move a destination or product along this chain until it was placed in front of the Spanish traveller eager to see the world. Now it’s not so clear to me and my address book is full of scratches and even torn out pages.

For more than a decade the travel distribution and marketing sector has been in constant evolution in an attempt to adapt to new technologies and new passenger profiles. This process of unstoppable but gradual change has been in the context of an ever-growing (or so we thought) demand for international travel. But when evolution is put under the pressure that today’s tourism sector is under, it accelerates until evolution becomes revolution and the result of a revolution is always unpredictable.

Situation of the Tour Operators and Travel Agencies Pre-COVID19

In order to understand the current panorama that our sector is facing, it is necessary to make a small summary of the situation of this niche before the arrival of the COVID-19.

It is well known that with the advent of the Internet it seemed that the sector was doomed to disappear, since it meant direct competition, easily accessible by everyone and with an apparent economic benefit when it came to making the purchase for the end user. The truth is that, according to the Cetelem Observatory, 20% of trips are purchased through physical agencies, and generally have a higher average expenditure than that made by the Internet. That said, it is not surprising that the number of travel agencies, tour operators and workers employed in these businesses has seen exponential growth in recent years, reaching 9,590 companies registered under this activity by the end of 2019. And with a growth forecast for 2020 that was quite positive.

Spain is a market dominated by large groups that have opted for vertical integration with the opening or acquisition of companies in each phase of the travel value chain. These groups have a wholesale division, a retail division, inbound, in some cases hotels and even their own airline. The objective has been to achieve efficiency, economies of scale and negotiating power by controlling each stage in order to be able to serve both the leisure and the corporate sector almost without leaving their own group. Compared to independent agencies, these groups are true titans with an unbeatable management power that is reflected in their annual turnover. According to data collected by Statista¸, in 2019 they had a turnover of more than 5.5 billion euros. On the other hand, it is also interesting to observe the behaviour of the franchises in the sector, which saw an increase of three franchise networks compared to 2018 and reached 19 at the end of 2019, according to data collected in the same report. Of course, the consolidation and grouping, either in the form of vertical group, franchise or central purchasing is the best strategy to defend a traditional business model from the attack a new model. But it is a model that depends on volume and a dimensioned market and sector and in a matter of months the volume has completely disappeared.

For a clearer picture, it is also important to mention the mergers that have been predicted since the end of last year. The process of merging Avoris and Globalia has undoubtedly been one of the great milestones, and after passing all the necessary filters, it seems that it will soon become a reality. And what does this mean for the industry? Although there is nothing corroborated yet, and we do not know what the next steps will be due to the current situation, the merger of these two entities would consist of around 1,500 travel agencies, 12 wholesale companies, 2 receptives as well as numerous online channels. Still without specific official data, we can say that this would make it the market leader, followed by Viajes El Corte Inglés which currently has a network of 600 agencies in the Spanish market.

As far as independent retail agencies are concerned, Spain has, or had, more than 4,000. These are independent agencies, which do not belong to any group, but still offer a very significant source of work and income for the community in which they are located and should certainly not be relegated to the background. Although they do not have a turnover as high as the large groups, they are gradually becoming part of a network that adds up. In most cases, these agencies have only one point of sale and a staff of between 1 and 10 employees. And generally, with a fixed and constant clientele. In many cases they also offer their own product and pay detailed attention to the tastes and needs of their clientele.

The Community of Madrid is the region in Spain with the most companies in this sector, and the average expenditure in 2019 in these establishments amounted to 1,328 euros per person.  Having made a small point of the situation of the pre-COVID-19 sector, I think it is worth noting the boom that the sector was experiencing and the high growth forecasts. Because, although it is not high growth, it is growth, after all and that is always positive.

This is the most repeated question, not only in our heads, but also in the vast majority of conversations I have been able to have with colleagues in the tourism industry.

Many claim to have lost a large volume of their sales, and almost all of them give up on summer because of not knowing “what will happen”. We must not forget that we are in a health crisis, and we must abide by the rules and regulations applied by the Government and the corresponding Ministry. And the lack of clear direction in this regard creates uncertainty in the end consumer, which ultimately affects these businesses due to the impossibility of being able to predict when this situation will improve. The truth is that no one has a crystal ball and it is difficult to anticipate a particular situation.

In addition, we must add the situation of the employees, who in most cases are in a Temporary Job Regulation, either partially or totally, and there is no forecast of when they will be able to return to normal. For the time being, everything has been cancellations, changes of dates, provision of bonuses for “when everything improves”.

In the midst of this situation, there are also policies and regulations that are constantly being modified, such as the recent decision by IATA and the publication of the New Travel Agent’s Manual, which will come into effect on June 1, 2020, and in which the agencies are more unprotected, which is fueling the feeling of insecurity and instability that we discussed earlier.

During many of my conversations these days, which in the vast majority of cases translate into talks between friends, there has always been a hopeful tone. The national travel seems to be starting to rebound, the “travelling worm” is starting to bite the Spaniards, who are already venturing to search and book nationally, hoping to recover something from the “stolen” summer.

Long-distance destinations are the ones that discussions indicate will have a slower recovery, again due to limited mobility. However, some of the companies claim to have already received bookings and applications for the end of the year and the beginning of 2021. In long distance, and in general, a recovery in sales is expected to start in Q1 2021, in view of Easter. Domestic and short-haul destinations will benefit earlier, mostly because of proximity.

But then again, it’s all speculation. For now, we continue to assess the situation in the sector and although it is difficult to quantify, we are aware that the COVID-19 pandemic has forced many agencies to pull down their blinds and we hope that the development and the next steps will allow them to return to normal and recover the good rhythm that we once had.

Despite the current situation, the tourism industry is resilient and in the face of adversity upholds a positive spirit. These are difficult times, but we have come out of much worse situations, stronger and with a greater learning curve that allows us to reinvent ourselves and continue moving forward. And it is from uncertainty and ignorance that we have the ability to reinvent ourselves and seek new ideas, new opportunities and continue to move forward.

Our sector is full of brilliant minds. Now more than ever, mutual support is needed to save something that for some of us is essential, and that is the tourism industry. We will get through this. 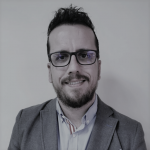 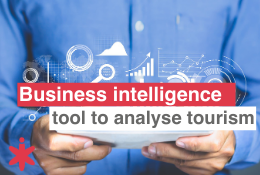 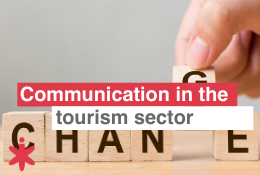 Communication in the tourism sector in times of pandemic