Get Ready For The Impact 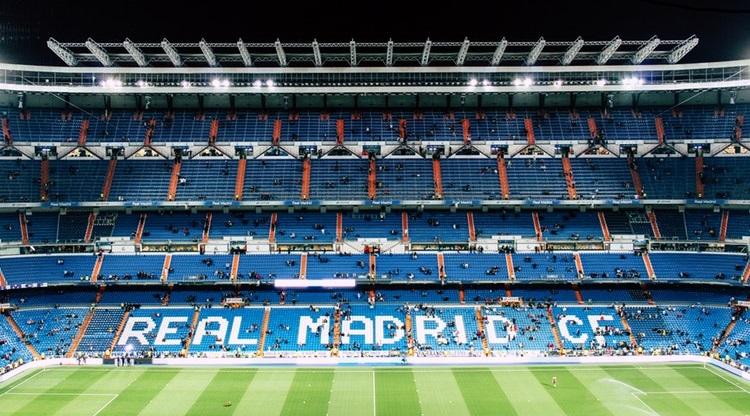 This Spanish cultural phenomenon has quite some history- dating back all the way to 1902, the incredibly famous Real Madrid C.F. was born. Futbol was first introduced to Spain by students of the Institución Libre de Enseñanza. In the year of 1897, a club called “Sky” was founded where many mornings were spent playing at Moncloa. As time passed, the club eventually split into two- and this was when the organization that the world knows so well today finally rose- on March 6th, 1902 Juan Padrós began Madrid Football Club’s everlasting journey of success.

Unknown to me, 18 years after it’s start, King Alfonso XIII presented his love for the game by honoring the team with the “Real Madrid” name, signifying royalty.

Being that football and its success has been such a prevalent part of European culture, it never occurred to me the extent of struggles that this organization faced- most importantly the rise of the Civil War. Roughly 70 years ago, the team essentially ceased to exist, which I could not believe considering its prevalence today.

Recently, I had the fortune of touring the Santiago Bernabéu Stadium- if I am being completely honest, I was not all that excited, as being from the United States I didn’t find fútbol to be incredibly interesting due to it’s inferiority at home.

My lack of excitement was quickly changed as I only entered the café. Not the stadium, just the café. It was beautiful. A restaurant of luxury with impeccable service, allowing you to enjoy a meal with friends and family all the while your face pressed up against the glass, overlooking the field. I had never seen anything like it before.

The restaurant was only the beginning- I made my way to the actual stadium tour and was instantly overwhelmed. Upon entering, I was greeted by past victorious moments captured on film- alongside trophies, cleats, jerseys, and endless photos. I was instantly amazed, and overwhelmed with emotion- on one hand, I was angry with myself for being so ignorant to something so beautiful, and another I felt so privileged to experience something of this intensity and significance.

Continuing through the tour, I walked through galleries of more trophies, cups, and jerseys. Past recorded cheers, referee calls, and sports announcer commentary blared throughout each room, alongside moving screens. The technological elements appeared almost holographic.- the effort implemented to present this team showed me the true love and passion that Madrid has not only for the support, but in general.

Upon completing the stadium tour, I decided I had to attend an actual game- I made my way to the Champion’s League game, Real Madrid versus Roma. I had a completely different feeling upon entering the Santiago Bernabéu Stadium this time- people were everywhere, wearing bright white Real Madrid jerseys, hats, and scarves with huge Real Madrid logos all over them. The bright white stadium lights, endless seats filled with people, and music blaring completed the setting for the game to begin.

I couldn’t believe the passion that every attendee had for the game- especially the designated fan section. A sea of white, with people jumping, dancing, cheering, NEVER taking a seat throughout the entire game- now THAT is true love and support (America, take note). Upon the start of play, I was instantly enveloped into the game. I couldn’t take my eyes off of the field until the game was finished.

This experience was completely different than any other sporting event I have ever attended- the true love, passion, and genuine support does not go unnoticed- I have to admit, when walking through the tour of Bernabéu and watching the game, I felt slightly emotional due to the presence of pure love and passion that the Madrileños so willingly provide.

Considering my short stay in Madrid, I knew this this was a once in a lifetime experience I had to pursue, one I will never forget- I feel so fortunate to have experienced such a large, and beautiful part of Spanish culture, an adventure that I will remember with clarity years ahead.